A Fragmented Masterpiece: Recovering the Biography of the Hilton of Cadboll Pictish Cross-Slab

Around AD 800, a superbly carved cross-slab was erected at Hilton of Cadboll in north-east Scotland. The major part of the stone now stands in the National Museum of Scotland, and the story of what happened to it in the intervening centuries is told here. Excavations at Hilton of Cadboll in 1998 and 2001 revealed not only fragments of the missing original carved face but also the lower portion of the stone still set into the ground, and this has allowed the art history of this magnificent Pictish monument to be assessed more fully than ever before.

The ‘Pictish’ cross-slab from Hilton of Cadboll is one of the glories of the early Middle Ages. This comprehensive – art historical, theological, archaeological, historical and scientific – monumental biography locates its birth in the ecclesiastical structures and religious beliefs of late 8th-century Scotland.

There could perhaps also have been more extensive coverage of the context in terms of the Early Historic political geography […] but none of this detracts from the epic nature of the volume and its important contribution to our understanding of this most complex and important fragmented masterpiece.

Dr Heather James runs Calluna Archaeology. She was a manager at Northlight Heritage specialising in Community Archaeology and has been working in Scotland since 1984. She has experience in archaeological fieldwork throughout the UK, and in Italy, France, Jordan and Peru.

Dr Isabel Henderson is a former Fellow and Director of Studies of History of Art at Newnham College, Cambridge. She has published widely on Pictish art, notably on the St Andrews Sarcophagus and the Hilton of Cadboll, Cross-slab.

Dr Sally M Foster is a Scottish archaeologist and senior lecturer at the University of Stirling. She specialises in the archaeology of Scotland, particularly the Picts and their neighbours in the early medieval period.

Professor Siân Jones is a Professor of Heritage in History at the University of Stirling. She is an interdisciplinary scholar with expertise in cultural heritage, as well as on the role of the past in the production of power, identity, and sense of place. 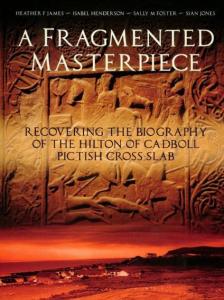